So, you were told that you need surgery?

A decision to have surgery (major or minor) is definitely not an easy one to make. It is an important healthcare decisions.which involves the patient as well as the family. This decision should be taken seriously.

Most probably your referring physician or primary doctor have recommended a surgeon. They may actually went as far as referring you to one. The good thing about their referral is they have worked or known that surgeon for a period of time. That does not mean that you should go and have the surgery without some homework. Don’t take your surgeon’s qualifications for granted.

Finding the right surgeon can be a challanging task.

Here are some tips and information that will help you make this important decision.

Before you start, you need to know your disease. At least the name of the disease. I cannot even tell you how many patients showed to my office without knowing the reason. The health care information is readily available on the internet and the public library. Search and learn. Read and study. It is your health.

I am not asking you to become a doctor or a physician. but I am asking you to be a responsible patient (custmor). In a different language, you are shopping for the most important decision that may involve your life. For an example, we take time to study the different brands, sizes, colors and prices before we buy a refrigerator. Our health and lives diserve the same attention to details, the very fine details.

Knowing your disease will help you:

2- What to look in a Surgeon 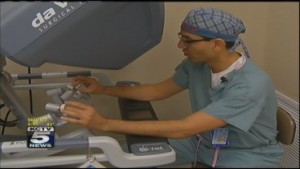 Dr. Niazy Selim is a surgeon at KU Med, and he removed the mayor’s gallbladder.

The University of Kansas Hospital is the only hospital in a seven-state area to perform a new minimally invasive surgery.

When people think of da Vinci, they probably think of the famous artist from history. However, at KU Med, da Vinci is a robot performing minimally invasive surgeries like gallbladder removal.

The procedure was approved by the FDA in December.

And one of the robots first patients is a familiar face right in Kansas City.

Kansas City, KS, Mayor Joe Reardon conducts city business, but recently he had to take care of some business of his own.

“First of all, I had heard from other folks about Dr. Selim, so the reputation of a great surgeon that is here at KU which we are coming to expect at this medical center, you know you have got quality people working here day in and day out,” Reardon said.

Reardon was the first patient to have the operation done in the metro.

“Couldn’t think of a better place to be when I needed to have my gall bladder addressed than right here,” Reardon said.

Reardon’s gallbladder was removed by the robot.

Dr. Niazy Selim is a surgeon at KU Med, and he also helped removed the mayor’s gallbladder.

Selim said the benefits of the new da Vinci robot are countless.

Aside from being sore, Reardon says the pain feels like he has been working out the abdomen area.

“That is the kind of soreness,” Reardon said.

“When you pull, it will move the arms … you push, it takes in … you turn, your hands, it turns in,” Reardon said.

In less than a week after having the procedure the Reardon said it was just a matter of adjusting to being without the gallbladder.

“Going forward is going to be something that is a lot better than when I was or I had it before,” Reardon said.

Reardon also said his mom has been around to help him and take care of him since his surgery.

Selim said the technology was originally engineered by NASA more than 20 years ago. However, the gallbladder removal procedure was approved by the FDA back in December.